This table shows you the list of the horses of which you have to prepare the race strategy. If you are the jockey of other owners, you can enroll their horses in races.

As a jockey, you have to prepare the running strategies, and you have to test the horses to improve their obedience too.

You can click on the time shown in the column "Last race" to see what strategy you had chosen.

Each race is composed of sections of 100 meters. To prepare a race, you can define 2 parameters for each section : the speed and the line.

Under the preparation, a graph symbolise the race. It permits to see the form of the track. By dragging and moving your mouse on the track, you can visualise its other parts. You can use the zoom buttons under the graph to see the track with less or more details too.

The speed represents the way you push your horse. If you put "not prompted" (the minimum), your horse runs to his basic speed and does not get tired. If you put "whipped" (the maximum), your horse goes "as quickly as possible" and draws at most from his energy. You can also put intermediate demands of effort (a little prompted, prompted or very prompted).

When your horse does not have force anymore, and you keep on asking him efforts, his results fall. Your purpose thus is to grow to best your horse without reaching the limit of his resistance.

Running to the rail allows to go faster in the bends (there is less distance to be run), but the horse can be stuck by a horse in front of him.

To create a running strategy, you need to consult the resistance and the biorhythm of the horse. The whip point calculator gives you a rough strategy, but your experience is the only one that can enable you to refine your strategies.

Each speed is equal to a precise number of whip points :

In our example below, we have a horse with 155 available whip points and a very good biorhythm of 1. He has to run a race of 2400m. There is a bend 100m after the start of the race. 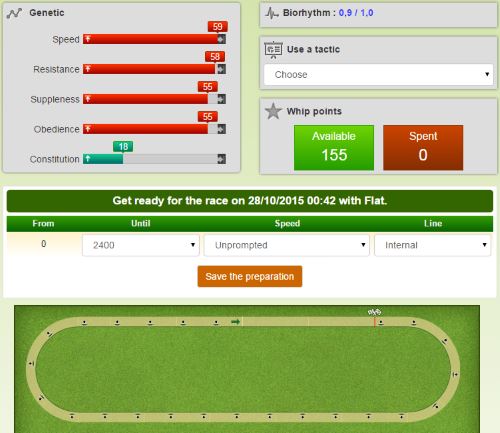 On the 3rd line of preparation that appeared, we define our speed for the straight line until the arrival. We choose "whipped" and "middle" to reduce the risk of being blocked by another horse but without taking the risk of being too far of the rail during the bend.

The graph that symbolises the track shows with pictograms the position chosen on the track for each section of the race and displays a number of whips proportional to the chosen speed. 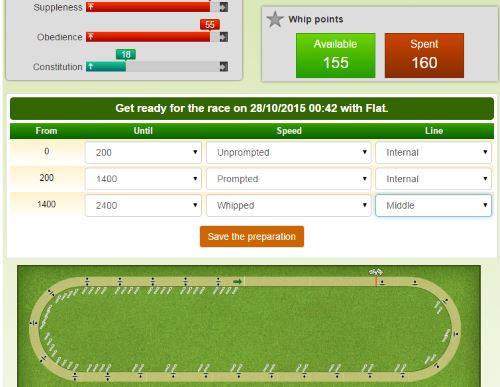 A running strategy is automatically and randomly proposed by the program during the validation of the race, in order your horse is not too much disadvantaged if you have no time to prepare the race. In that case, you won't be considered as the jockey of the horse, the "webmaster" will take your place.

If he sees that the jockey did not prepared a horse, his owner can take his place of jockey just for one race.

You can use the test to estimate the performances of a horse and thus to refine your racing strategy, but after that you have to let the horse rest during 3 hours in order he recover his capacities totally. 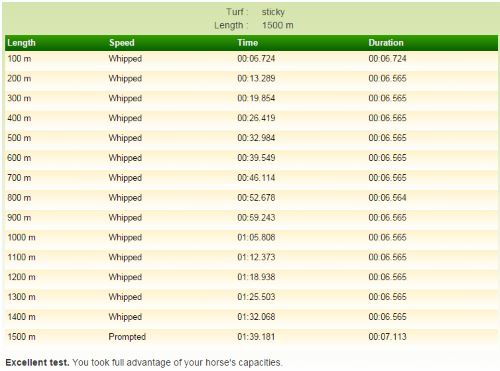 Tests also allow you to work on the biorhythms of your horses. If you pushed a horse enough, but not too much (as you have to do for a race), his biorhythm will progress.

The tests make obedience improve too. If you push your horse enough, but not too much (as you can do for a race), his obedience will progress.

If you don't achieve making a good test or if you don't have time to make them every day, you can activate the automatic test. The stable-lad will make a test once a day (usually between 0h and 8h) to make the obedience of the horse progress properly. The automatic test doesn't tire the horse, but it doesn't give you the time made during the test.

The automatic test is set by default just before the birth of your horses, you don't need to activate it manually.

This page shows you the list of the races in which you can enroll a horse and then permits you to select the horse you want to enroll in the race you chose.

When you found efficient driving strategies you can save them in this page to keep them ready to be used. You just have to give them a name and save them. Then you will be able to use them directly from the test card or the race preparation card by choosing it on the drop-down list.

This page shows you the horses you drive for other owners. If you have a waiting request, you can accept or refuse it. You can cancel a current contract too.

You can use the boxes to tick on the left column, then the drop-down list above them, to change the status of a group of contracts.

If you are the jockey of a horse, you earn 7% of his stake.